Though admittedly not as famous as the '72 Summit Series or the '76 Canada Cup, the decade had lots of international play on WHA ice as well. Prior to the '74-'75 season, players like Yakishev, Kharlamov and Tretiak toured Canada and faced off against the Howes, Bobby Hull, Gerry Cheevers and a host of Canada's others. Though not the first time a Canada/USSR showdown was held, it marked the first of many matchups the league had against the rest of the world, including a 3 game series between the Moscow Dynamo and the WHA all-stars and a series with them and the Czech Nationals going up against each of the 8 teams in the league at the time, with the results entered into the standings - 2 visionary ideas showing the WHA's knack for being ahead of the times, as the NHL had never attempted them.
1974 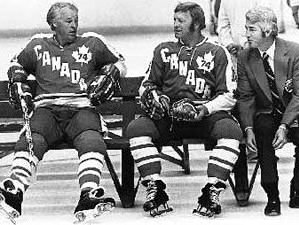 On Sept 17, 1974 a team of Canadian delegates began an 8-game series against the USSR. Just as was the case with the Summit Series 2 years earlier, the nation's hockey fans showed up in droves to see the legendary mystique of the Soviet hockey machine. They split the first four games here, each winning one with 2 ties.
Before resuming the series, Team Canada made stops in Finland and Sweden, beating them 8-3 and

4-3 respectively. But all the travel and ice-time showed when they reached the Soviet Union. They played another four games in 6 days beginning Oct 1, with the Soviets winning 3 and tieing one. Though they lost the series with a 1-4-3 record, there were still a few bright spots for Canada.
Bobby Hull, Ralph Backstrom, Gordie Howe and Andre Lacroix all scored at least 7 points during the series. Cheevers also was between the pipes for all but 1 game. Though sporting a 3.43 GAA, his play was at times nothing short of spectacular. Don MacLeod's only appearance was an 8-4 loss in game 3 in front of his hometown of Winnipeg. Following the series, the team then made a stop in Prague, where they finished their first year of international play with a 4-1 loss to the Czech National Team.

WINNERS ARE IN RED

The 1976 Canada Cup saw the only time that players from both the WHA and NHL played together in honour of their respective countries.

On January 3, 1976 in Cleveland saw the WHA host the first all-star game which featured a Canada-US showdown. Though they played for Canada in the '74 Series, Paul Shmyr and Mark and Marty Howe played for the US in the annual mid-season classic, which Canada won 6-1 . Interestingly, the core of the American squad also made up a good majority of the national team that participated in the inaugural Canada Cup that September as well. Though it obviously had its share of the NHL's top players, there was also a strong showing on the tournament by the WHA, including Hull, the Howes, Frank Mahovlich, and representing Europe, the likes of Anders Hedberg and Ulf Nilsson. Incidentally, Canada won the tournament, beating the Czechs in the finals 2 games to 1.

1978
The '77-'78 season saw the WHA make another innovation in hockey. The Czech National team and the Moscow Dynamo played 8 games each - one each against each team. Both visiting squads left with losing records, but attendance was still generally quite good. The results were entered into the final standings, a concept of a truly 'world' league the NHL has still never attempted - though many still hold as a dream today.
1979
The WHA's final season in existence saw, fittingly, one last tour of duty for an international team. The Moscow Dynamo, the Soviets' second best team travelled to Edmonton for a 3-game exhibition against the WHA All-Stars. The WHA swept the series, outscoring Moscow 12-7.
top of page