BEFORE THE FIRST BLUE PUCK

The first real threat to the NHL's dominance over the hockey world began when Dennis Murphy and Gary Davidson concocted the World Hockey Association. No strangers to starting rebel sports leagues, they were also behind the defunct by now American Basketball Association and World Football League.

Officially announcing their intentions to start a rival to the NHL on June 10, 1971 in New York City, the WHA's philosophy was relatively simple - establish themselves in cities shunned by the NHL (many Canadian), as well as set up base in North America's media centres, going head-on with the competition.

Knowing a presence in Canada would rely on a homegrown patriarch, Wild Bill Hunter, a prairie hockey fan who just happened to own the Edmonton Oil Kings of the Western Hockey League was approached. Always feeling shunned by the NHL, Hunter quickly embraced the chance to help form something new. He basically graduated his Oil Kings into pro hockey's first Alberta entry - the Edmonton Oilers.

Realizing that Edmonton was only one of a number of Canadian centres that felt shunned by the NHL, Hunter embarked on an ambitious road trip trying to drum up support, convincing Ben Hatskin easily that Winnipeg was a natural fit for the WHA. Hatskin was on board almost instantly, and began forming what would arguably become the epitome of the World Hockey Association, the Winnipeg Jets.

On Nov 1, 1971, Murphy and Davidson announced the 10 charter cities would be Edmonton, Calgary, Winnipeg, Los Angeles, Miami, Chicago, Dayton Ohio, Long Island NY, and St Paul Minnesota, with themselves owning a club in San Fransisco. 3 weeks later, two more franchises were added to the roster, with the New England Whalers anchoring themselves in Boston and a team to travel the highway between Ottawa and Toronto. But before the first puck was dropped however, several shufflings occurred after the NHL announced it's own expansion to Long Island and Atlanta.

Disgruntled after learning they'd be sharing Nassau County Coliseum with the NHL's Islanders, the upstart Raiders moved upriver to Manhattan.Fearing the South couldn't take 2 teams in a new sport, the Screaming Eagles were also on the fly, nesting in Philadelphia as the Blazers. Though they weren't in fear of competing with the NHL in that market, the owners of the Dayton Aeros weren't pleased with initial interest and they moved to Texas, another hockey-virgin state, making Houston their home. But feeling a presence in Ohio was integral to the survival of the league, the league herded up the Calgary Broncos and moved them to Cleveland, where they became the Crusaders. This forced Edmonton to share the Oilers (basically the evolution of the WHL's Edmonton Oil Kings) with Calgary under the monikor 'the Alberta Oilers'.

And when the owners of the team proposed for Ontario couldn't come to an agreement with Harold Ballard to share Maple Leaf Gardens (there's a shock !), the club was moved to Ottawa full-time and dubbed The Nationals. The obvious conflict of interest Davidson and Murphy were faced with by owning a club as well as the league prompted them to sell the San Fransisco Sharks to a group in Quebec. A deal with Le Colisee in Quebec City was reached and Les Nordiques (the Northerners) were born. This also led to the club to be based out of Los Angeles to steal the name Sharks, and lose the Aces.

A key selling point in luring both established NHL vets and rookies was to waive the reserve clause in their current contracts, which severely limited escalating salaries. An advantage geared solely for signing players as young as possible was also introduced, when the mimimum age a player could be drafted was lowered to 17. The league held its initial draft on February 12, 1972. Each team was allowed to protect four players. Although a few young minor leaguers and Olympians who the owners were hoping to build the future around were on the list, mostly major stars from the NHL had their WHA rights reserved ... just in case ...

Most aggressive in trying to lure NHL'ers over to the other side were the Quebec and Chicago camps. Their general philosophy was to get names already known and loved by Les Canadiens and Black Hawks fans. Some of the names to initially be approached by WHA clubs who never did sign included goalies Ken Dryden, Phil Myre, Doug Favell, Gilles Villemeure and Eddie Johnston, as well as Gilbert Perrault, Jacques Lemaire, Guy Lapointe, Brad Park, Peter Mahovlich, Steve Shutt, Daryl Sittler and Bobby Clarke.

Although most of those courted shyed away from the new league, The Maple Leafs' Bernie Parent was the first 'name' to cross the line, signing with Miami. Shortly after announcing their morph from the Miami Screaming Eagles to Philadelphia Blazers, they also lured Boston Bruins' seasoned vets John McKenzie and Derek Sanderson. Highly afraid of flying, Sanderson's contract stated he didn't have to play road games he couldn't get to by bus or train, and was actually the highest paid athlete until the definition of 'WHA' was made clear .... 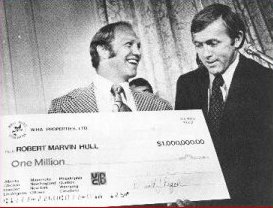 It was Bobby Hull's inking a deal what at the time was the most ever paid to a hockey player with Winnipeg that got the attention. Eager to have arguably the top player in the game in the new league, the $1 million signing bonus was chipped in by all teams as well as league officials. But the Black Hawks weren't giving in without a fight. A last minute injunction against Hull kept him from lacing up his skates with

This opened the doors for several other NHL'ers to jump ship, including the Blazers' snagging their fourth 'name' in the Flyers' Andre Lacroix. Taking a page out of several other WHA playbooks by going after a cross-league hometown hero, he was a hot shot upstart that didn't seem to be fullfilling his potential. Lacroix would wind up owning virtually every scoring title in the WHA, but never hoisted the Avco Cup.

When the group behind Calgary's club moved to Cleveland, Ohio, they instantly entered the high-stakes war when they came to terms with disgruntled Boston Bruin Gerry Cheevers. Tauted as arguably the best puck stopper in the game, Cheevers would go on to be an early high ticket item for the league, giving the Crusaders instant credibility.Chicago meanwhile came to terms with ex-Hawks Pat Stapleton and Ralph Backstrom, then playing with the New York Rangers.

Quebec meanwhile employed the same tactic, signing several players in the Montreal lineup including Jean Claude Tremblay and Rejean Houle, as well as many in Les Canadiens' farm system who weren't being given the opportunity to showcase their

talents. Unlike most other 'names' that defected and STAYED, Tremblay and Houle were behind the cornerstone of Les Nordiques' success in the WHA, and would both be one-team men. Along with Hull and Lacroix, they were among the few players that did a full 7-year tour of duty with the WHA.

Another key to presenting the new league as an 'alternative' was to use red pucks. Naturally this added to the 'curiosity factor' the media was already feeding on. Although they'd lost a few key players, the NHL wasn't taking the new kids on the block too seriously ... in public. But placing teams in Long Isand and Atlanta to rival the WHA's plans in those markets told a different story. The key would be media coverage - and for the most part television coverage during the first year was rather indifferent. But as the league's inaugural season drew closer, areas too small by NHL standards such as Edmonton, Calgary and Winnipeg embraced the new league whole-heartedly. Ironically, those three Canadian cities were among the four teams to survive the NHL's hostile takeover in 1979.