When the WHA announced its intention to begin play for the '72-'73 season, Canadian businessman Doug Michel originally intended to place his team in Toronto. But unable to secure a deal with a decent facility, the franchise was placed in Ottawa instead. Playing out of the Ottawa Civic Centre, the Nationals were able to put a fairly respectable team on the ice, finishing fourth in the East with 74 points. But unable to get more than 3,000 people out to the games, the team played out their first round playoffs series against New England in Toronto's Maple Leaf Gardens. The Nationals would drop the series in 5 games to the eventual Avco Cup Champions. But despite the loss, the NHL's Leafs weren't in the playoffs that year and stellar crowds came out to see what all the WHA hub-bub was about. Now with some leverage, Michel tried to re-work the agreement with their Ottawa arena to off-set the team's losses. Unable, he sold the team to John Bassett, who moved them to Toronto full-time for the league's second season.

Renamed the Toros and playing in the dillapidated Varsity Arena, the team began building around a group of up and comers. High hopes were placed on the shoulders of Pat Hickey and Peter Marrin, both who neted 20+ goals their first season and be in the running for rookie of the year. The team finished with 25 goals more than the previous year, third in the league. Backed by the pair of Les Binkley and Gilles Gratton between the pipes, the Toros lowered their GAA 29 goals from the previous year in Ottawa. Finishing second in the East and fourth overall, the Toros took their 86 points into the playoffs to face the Cleveland Crusaders. Coach Bill Harris would later be named coach of the year, whose Toros were on a roll , knocking off the Crusaders in 5 games. Their second round opponents would be Chicago. And though the Toros were heavily favoured to win, the Cougars were on a roll of their own, taking the series in 7, before being swept in the finals by the Houston Aeros.

The team struck a deal with Maple Leaf Gardens for the upcoming season, playing there when the Maple Leafs were out of town. They began the year at home in a 5-3 exhibition loss to the Minnesota North Stars. Disappointed with their early exit from the playoffs the year before, management tried to balance the young core with experienced role playersfrom the NHL. Along with highly touted prospects Wayne Dillon and Mark Napier, who'd go on to win Rookie Of The Year, they signed Frank Mahovlich from Les Canadiens, a 500 goal man and Paul Henderson,from the Leafs and best known for his series winning goal in the eighth game of the historic Summit Series between Canada and Russia in 1972. Both players would eventually be inducted into the Hockey Hall of Fame and immediately brought their wealth of experience and locker room character to the Toros, as well as their names alone attracting fans. The Toros also landed a deal with VaclavNedomansky, a native Czech who was touted as one of Europe's top players. Named tournament MVP during the series of games against the WHA, Nedomansky also scored 41 goals and 40 assists his first year with the team. Expanding to 14 teams, the league adopted a 3 division line-up, and the Toros finished second in the Canadian with 88 points, fourth overall. They went up againt San Diego, who'd been transplanted from New Jersey that season, and dropped to the Mariners in the first round in 6.

Disaster struck the Toros and the league the next season. The Minnesota Fighting Saints and Denver Spurs both folded in mid-season, and the Toros plummeted from the near top of the league to a disasterous 24-52-5 record, worst in the league. Even the Saints had accumulated more points after only 59 games. With Gratton now tending nets in the NHL, the Toros GAA ballooned to 398, highest in the league. 6 goalies played for the Toros that season, and the only bright spot in net was a young John Garrett, who'd signed with the Toros after the Saints packed it in earlier that year. But poor play on-ice usually leads to a dwindling gate draw. The Toros were no different. Mark Napier was named Rookie of the Year, but unfortunately for the franchise he'd bolt to the NHL the next season. Their NHL cousins were starting to regroup and were now outdrawing the Toros again. Unable to strike a new deal with building owner Harold Ballard, who also happened to own the Leafs. Bassett saw the writing on the wall. The Toros were herded up that summer and shipped to Birmingham, where they'd play as the Bulls until the WHA folded after the '78-'79 season. 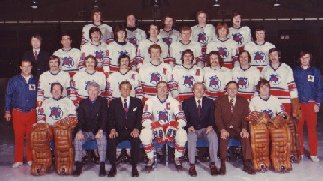