When the WHA began the inaugural '72-'73 season, Calgary was intended to be one of the charter cities. But after a deal couldn't be reached with arena officials, the deal fell through. The league awarded the franchise to Cleveland sports entrepreneur Nick Mileti, who also owned baseball's Indians and the NBA's Cavaliers. Playing out of the 9300 seat Cleveland Arena, initial attendance was one of the better of the league. The bulk of the team was made up of the Broncos' roster, which included Jerry Pinder as well as future hall of famer Gerry Cheevers in net . Cleveland put together a defensively-minded squad which included former NHLer Paul Shmyr, originally drafted by Miami, that rode Cheevers to second place in the East and third overall, allowing the fewest number of goals with 239. Their first round playoff opponents were Philadelphia. Though nearly evenly matched in every stat, the Crusaders swept the Blazers in 4 games due largely in part to Cheevers' stellar play. Unfortunately though, their inaugural run at the Avco Cup fell short in the second round, dropping to the eventual champion New England Whalers in 5. Though little consolation, Cheevers was awarded the first ever Ben Hatskin Trophy for best goaltender.

The '73-'74 season saw the Crusaders draw good crowds again, still averaging 6000 a game. But on-ice the team had slipped a notch, giving up 25 more goals than the previous year and scoring 21 less. Finishing third in the East, they went up against the Toros in the first round of the playoffs, and went out with only a whimper in 5 games.

The '74-'75 campaign began with a move from downtown Cleveland to Richfield Coliseum, twice the size of their old home, but outside the city. Despite a good crowd for an exhibition 5-3 loss to the Pittsburgh Penguins, a drop in attendance was noted through the course of the season, as the team began struggling on the ice and people weren't as willing to make the drive as expected. Despite the emergence of Al McDonough as a 30+ goals scorer, they finished the season with a mediocre 35-40-3 record, fourth worst in the new 14 team league. But with the addition of two new clubs, the league had changed the divisional structure and they finished second in the East. Up against the powerhouse Houston Aeros, who were also defending Avco Cup champions, the Crusaders were heavy underdogs. No surprises were in store, as they were taken out of the first round in 5, prompting Mileti to sell the club to Jay Moore druing the off-season.

The '75-'76 campaign saw the Crusaders in turmoil. After the collapse of the Baltimore Blades, who'd seen action as the LA Sharks and Michigan Stags, league officials wanted to keep the league 14 teams strong, so Cincinnati was awarded a franchise. This gave Cleveland a natural rivalry and they tried to build on it. But the Crusaders were in trouble. Cheevers left the team and league in mid-season and returned to the Boston Bruins. The team tried to compensate by using four other keepers during the season, and they managed to hold on to third in the East with 75 points. The collapse of the teams in Denver and Minnesota resulted in a change in playoff format that year. The Crusaders entered the first round in a best of 5 match-up, but were swept by the fourth placed Whalers in 3.

Shortly after the team's early exit from the playoffs, Moore's disinterest in a fledgling hockey team led to him selling the Crusaders back to Miletti. Unfortunately though, the NHL announced their plans to turn the California Golden Seals in to the Cleveland Barons. Knowing the city wouldn't support two pro hockey teams, he planned to move his to Florida, the WHA's second attempt at planting a team in the sunshine state. But when a deal couldn't be worked out on a stadium, the Crusaders were moved to St Paul, where they became the second incarnation of the Minnesota Fighting Saints. The franchise would fold after 42 games into the 76-'77 season. 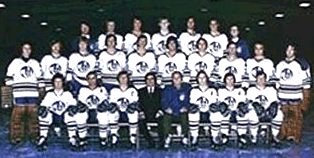