The Baltimore Blades were a troubled franchise before ever stepping on the ice. Peter Shagena and Charles Nolton bought the Los Angeles Sharks from league co-founder Dennis Murphy in the summer of 1974 and moved them to Detroit, renaming the team the Michigan Stags for the league's third season. But although hockey in Detroit seems like a natural, they couldn't secure decent television coverage. Management had to cut costs by trading their one marquee player, Marc Tardif, to the Quebec Noridques. A dismal showing after 61 games had the team on the brink of packing it in. Not wanting to see a club fold in mid-season, the league all but forced the Stags to move to Baltimore to play out the remainder of the year in The Baltimore Arena. With a capacity of 11,000, they had the benefit of one of the league's better facilities. But with the NHL icing the Washington Capitals just down the road in Landover the year before, the Blades' future looked bleak. Despite having Jerry Desjardins between the pipes, the team managed only 3 wins in their 17 games in Baltimore, finishing with the second worst record in the league. A massive campaign to keep the Blades in Baltimore was implemented, but two bad teams in 2 different leagues was too much for DC hockey fans. One had to go ... Shagena and Nolton planned to relocate the club again, this time to Seattle, Washington. The move would never materialize however. Unable to secure a rink or many other necessities if the team planned to survive, they officially folded in May of 1975. On a side note, Desjardins jumped just prior to the team folding and landed in Buffalo, where he and the Sabres went to the Stanley Cup finals the next season. 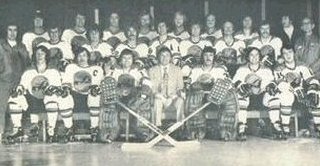